Already earning airplay on BBC Radio 6 Music and Radio X, their archetypically iconic mix of indie, pop and rock tropes, balances adolescent energy with a matured and articulate delivery that effortlessly pulls you in.
Live at 9.30pm, admission is FREE…..

ONE of the best front men in the South West, Andy Quick makes his long-awaited return to The Cove on Saturday, May 7.

With a rep for wild live shows, expect greatness and good times when this trio raise the roof in the First Floor Bar.
The Andy Quick Band formed in 2016 and were off to a great start as first single ‘Liberation’ impressed Songwriting Magazine who crowned it song of the day. Cue slots at some of the best UK festivals including Glastonbury, NASS and Boardmasters. 5 years later and with hundreds of experimental live shows under their belt they have blossomed into a confident band with a heavyweight setlist.
Andy is an eclectic songwriter and much like his first project Land Of The Giants, this new music is made for festivals; it’s rootsy, eclectic, vibrant and joyful. Musically the Andy Quick Band are impossible to pin down and have created a fascinating mash up of indie disco, raw blues, world beats, and tropical rock and roll! Wrapped around enveloping lyrics and huge choruses. The band are currently recording their new album ‘Revelations’ set for release early Summer 2022
Live at 9.30pm, admission is FREE…..
“A soul punch of indie, roots and blues.
Exceptional pedigree! 10/10” Ireland’s Unsigned & Independent
“…one of the finest front men we can boast in the South West….some of the best music we’ve heard this year. Watch out!” – BBC Introducing in the South West.
“…soulful, funky, and bursting with confidence…”
– THE DAILY JAM

Comedy Night is BACK… 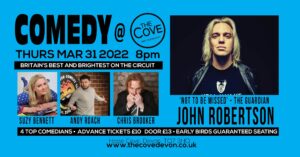 DEVON’S newest and most exciting hot-spot for live comedy returns with a fantastic line up at The Cove on Thursday, March 31.
A night of major laughs is in store for Hope Cove.
Hailed by The Guardian as ‘Not to be missed’, John Robertson is a high-octane cult leader with wild eyes and a thunderous voice. A stand-up, improviser and force of nature, he’s the creator of the hit live-action videogame show “The Dark Room” (4,000,000 hits on YouTube, over 500 performances all around the world), he faked a seizure on reality TV, wrote the Puffin kids book “The Little Town of Marrowville” and wants you to know he loves you, but he’s still going to yell at you.
Usually seen in theatres, clubs, gaming festivals, nerd events and rock shows.
Joining him are circuit stars Andy Roach and Suzy Bennett
And as ever the reigns of the evening will be held by resident host and compere Chris Brooker.
Tickets are just £10 in advance (£13 door) with early birds guaranteed seating.
Show starts at 8pm, tables available from 6pm with the Pizza Kitchen serving the First Floor Bar.
BUY now online or from the bar

It’s an open stage for those looking to showcase their talent.
Hosted by crazy bottleneck musician Benny Guitar Carr, his renowned Music Hall Sessions feature some of the finest local musicians around.
Expect blues, folk, country, rock and whatever you’ve got.
ALL are welcome.
Live from around 8.30pm, admission is FREE.
For more information drop us a PM or call 01548 561376 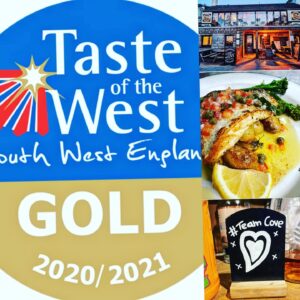 Happy days, we picked up a GOLD for casual dining in the @tasteofthewestflc Hospitality & Retail Awards.
Feedback from the judges included praise for our long-term commitment to local sourcing for dishes, including Salcombe Meat Co.
‘Portion sizes were impressive’ and ‘truly wonderful’ on the meals while service was ‘attentive, friendly and not intrusive’.
And we scored high praise for atmosphere and value for money: ‘there is a real buzz when you first enter, it felt like the place to be’.
‘Menu presented excellent value for money from a quality and quantity point of view.’
Thanks to everybody for their support over such a challenging year.
Nice to end it off with a couple of awards

TICKETS on sale for NYE…

LET’S party and see in 2022 with ONE big night of LIVE music down at The Cove on Friday, December 31.
The incredibly awesome eight-piece Freshly Squeezed are set to smash NYE at one of THE coolest spots in the South Hams.
Certainly the South West’s most raging live funk, soul and hip-hop outfit, they cover classic tunes and rare grooves with an unmistakable fresh take.
Smooth soul vocals, a smart MC, fat horns and a tight rhythm section come together to mashup old and new styles and slay any dance floor.
YOU ready?
LIVE music and tunes across the First Floor from around 9pm with tickets £10 and available either via BUY TICKETS above or from the bar.
Ground Floor restaurant open as normal.
For more information, visit www.thecovedevon.co.uk

Check us out on Social Media

GIVE it large with a trio of matches LIVE across m

We’re open everyday from 10am till late

We use cookies on our website to give you the most relevant experience by remembering your preferences and repeat visits. By clicking “Accept All”, you consent to the use of ALL the cookies. However, you may visit "Cookie Settings" to provide a controlled consent.
Cookie SettingsAccept All
Manage consent

This website uses cookies to improve your experience while you navigate through the website. Out of these, the cookies that are categorized as necessary are stored on your browser as they are essential for the working of basic functionalities of the website. We also use third-party cookies that help us analyze and understand how you use this website. These cookies will be stored in your browser only with your consent. You also have the option to opt-out of these cookies. But opting out of some of these cookies may affect your browsing experience.
Necessary Always Enabled
Necessary cookies are absolutely essential for the website to function properly. This category only includes cookies that ensures basic functionalities and security features of the website. These cookies do not store any personal information.
Non-necessary
Any cookies that may not be particularly necessary for the website to function and is used specifically to collect user personal data via analytics, ads, other embedded contents are termed as non-necessary cookies. It is mandatory to procure user consent prior to running these cookies on your website.
SAVE & ACCEPT